In 2010, conservative pundits and activists protested the construction of a so-called “Ground Zero Mosque” in New York.  Now, media personalities such as Glenn Beck, Sean Hannity and Rush Limbaugh are directing their efforts towards a different building – the Shrine Auditorium.

Activists gathered with banners and signs objecting to the building’s Islamic architectural style, shouting chants that made clear both their fears and their inability to count, such as “One, two, five, nine, get the Muslims off our Shrine!” “Three, eight, twelve, ten, keep our theaters Christian!” and “’Murica!  ‘Murica! ‘Murica!”

One concerned mother, Barbra Foxborough, expressed concern that the theater’s arabesque motifs would indoctrinate her children.  “What if my kids are here to see Justin Bieber or the Skrillex, and they see the musicians they admire in a Muslim building like this?  They might get converted to the Jihad!”

She added, “We invaded Afghanistan and Iraq to put a stop to terrorist architecture like this.  Saddam Hussein’s palace definitely had bas-reliefs of mass destruction.  And that’s why we’re going to invade Iran next year too.  So why should we allow a terrorist shrine to exist in Los Angeles?”

The concert venue just across the street from USC was built in the Moorish Revival style.  One demonstrator, a Tea Party member named Jack Flannigan, explained his beliefs, “Those distinctive domes and pointed arches,  they’re just so un-American.  We can’t have architecture like this after 9-11.  I say all of our auditoriums should be built like churches because this is a Christian nation.  If your building doesn’t look like a Gothic revival cathedral, you’re with the terrorists.” 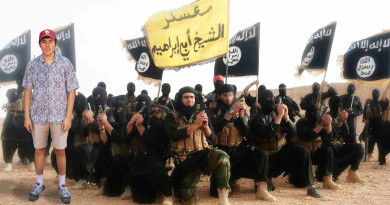