by Axel Hellman and Matt Kalina

Above: Indescript graph with upward trend and gold coins makes sense because this article is about stocks

The savvy investor will want to pay attention to the following news related to USC’s highest valued stocks.

If you own this stock, sell now.  If you don’t, short it, because it’s sure to tank.

The stock’s recent downturn can be accredited to a lawsuit filed by a student who allegedly found a screw in her food at EVK.

While pieces of hardware are normally introduced by accident (approximately 2% of EVK servings by mass according to FDA investigators), this little piece of steel is sure to spell big trouble for EVK Cattle Feed & Dining Hall Corporation.

“Most inedible matter is ground into pieces that are not visible to the naked eye. This helps us to simultaneously avoid litigation and give our food that special zest that our customers, both bovine and human, have come to expect, ” Tom Snizzworth, company spokesman told reporters. “We promise that our next batch will not be shipped out until all foreign particles are properly ground into the mixture.”

As they say, Parkside, darkside.  While the shade from tall buildings, fences, and parking garages around Parkside makes the area unsuitable for certain light-intensive agricultural crops such as sugar cane, soybeans or marijuana, Parkside is also widely known to be dark in a social sense.

Many residents find that the inconvenient and suite-style setup make it difficult to make the acquaintance of their neighbors. This was made clear to shareholders recently when two students died of unknown causes and were not found dead until three months later, when an unsuspecting janitor found the pair while investigating a smell complaint.

The preliminary coroner’s report cites “sadness, loneliness, and a general lack of social interaction” as the primary causes. Also, Parkside is an anagram of “rape kids”.  Stay away from this stock.

If industry rumors are true, Chano’s could make a fortune.  The drive-through taqueria is a popular hot spot for USC students, particularly on weekend nights.  A line 25 people long is not a rare occurrence after midnight due to its location right between the Row and campus.

There has been discussion at the National Drunk Mexican Food Restaurant Association that Chano’s might apply for a liquor license in the near future, which would make Chano’s a place where customers can get drunk, then indulge in their drunken cravings for low-quality greasy burritos all in one sitting.

Rumors also abound that Chano’s is applying for permission to create a fifty square foot “Southwest Mission Style Vomit Area” where customers can regurgitate for a nominal fee.  Since both alcoholic beverages and Chano’s Mexican food are both well known to induce profuse vomiting, business is sure to be brisk. Could there be more perfect business model?  BUY!!!

As USC implements more and more security measures on and off campus, private companies will see a windfall of security contracts and purchases.

SUCS, a nationwide college security firm, whose slogan is “Leading the nation in rectal cavity searches since 1987,” has just been hired by USC to construct a 40-foot tall stone wall and 12-foot deep moat to keep undesirables off campus.  SUCS already operates a successful prison for arrested bike thieves in the dungeons beneath Mudd Hall.

Human rights advocates have called for the prison’s closure, saying that conditions there are more deplorable and wretched those in USC’s more notorious holding facility, Leavey Library.  SUCS spokesperson Mike Roch commented, “The prison is very well-patronized and is helping out our bottom line. You might say that we have a captive audience.” 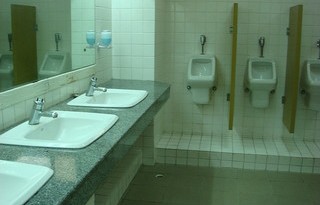