After seemingly endless torrential downpours, with students trekking though our muddied Southern California campus, USC has begun planning to predict cloudy days months in advance in order to give students days off for what President C. L. Max Nikias has named “rain days.”

The measure comes as a response to complaints from both students and their parents, who, according to one parent, “pay too much money in tuition for their children to have to walk to class in the pouring rain.”

Faculty are startled by the students’ inability to struggle through the hurricane-like 10-minute deluges that are known to flood the Southern California region a few times a year. “It’s a top 30 school. You think you’d be seeing more dedication. I guess that’s what you get when you teach basketweaving though, ” said Arthur Arthurs, a professor in basketweaving.

When interviewing the student body, it was a surprise for Sack of Troy reporters to find that almost 90% had never seen snow and that many believed it to be part of the myth of Santa Claus. “I thought snow was like the North Pole or flying reindeer. You know, something we all hear about but never actually see,” said sophomore Mary Klein, who is studying archaeo-anthro-paleo-meteorology.

These rain days might end up being a good thing for USC. Students could utilize their days off on the internet, trolling reddit instead of being on the front cover of it with their laptop umbrellas.

University officials also cautioned students to stay indoors and wear layers, warning that over the next few days, temperatures could plummet down to the mid-sixties. 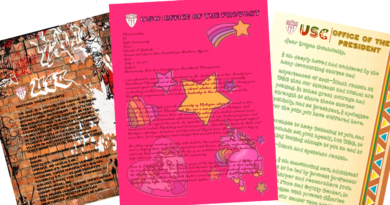 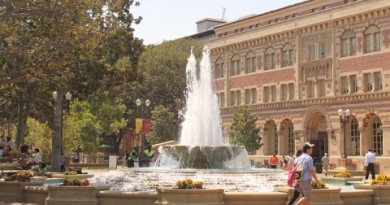 USC to Install Fountain to Commemorate Great Drought of 2014