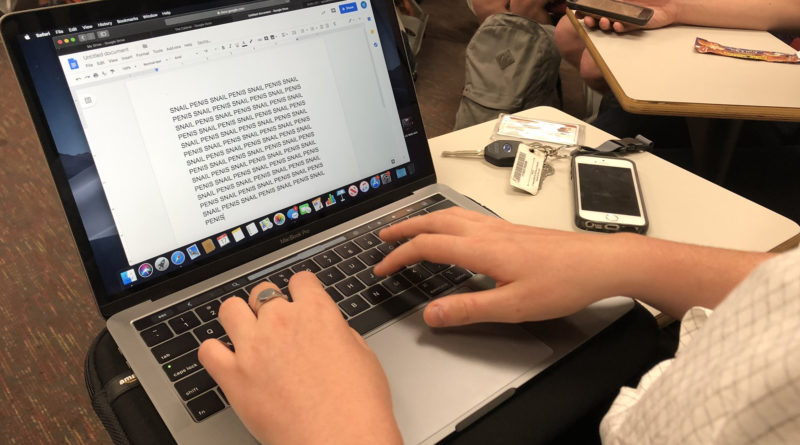 The Pew Research Center recently released a bold claim that’s been impacting colleges across the country: students are apparently sixty-five percent more likely to succeed on exams if they take their notes via paper and pen than if they type their notes on a laptop (and the laptop notes are just the term “snail-penis” written several times over and over for an hour).

The study was conducted last year at Florida State University in a Calculus 101 course. Researchers administered an open-note quiz at the end of a lecture. The students who were told to write their notes manually got an average of 94.3% while the other half, who were told to exclusively type “snail penis” during the lecture, failed – with nobody scoring higher than 52%.

The outcome contradicted most of the test subjects’ expectations. Sociology major Davis Sinclair stated, “I was shocked. I thought typing notes would be better because I could transcribe information faster, but apparently a shelled slug’s mister beeper really doesn’t help when trying to calculate Lagrange Error Bound. You actually have to write down like…math and shit.”

Schools nationwide are implementing the results of the Pew’s study into their curriculum. In fact, several USC professors are requesting students don’t take notes on laptops at all anymore. “What was I thinking? Bug genitalia? That has barely anything to do with Intermediate Macroeconomic Theory!” said Marshall School of Business President Geoffrey Garret. “Over these next few years, my team is hoping to help kids take notes smarter, not harder.”

The study has been mostly well-received, but there have been a few contrarians, particularly from Silicon Valley. In an interview with Business Insider, Amazon CEO Jeff Bezos said, “This is an outrage! Not using laptops to chug out some good ol’ sultry snail smut is neither tech-friendly nor sexually woke. It’s becoming Victorian England out here!”

To further his point, Bezos recalled his final memory with friend and formidable web titan Steve Jobs. Bezos stated, “I’ll never forget those last words he said to me. We were sitting in his hospital room, and he glanced over with those chocolatey brown eyes and said ‘Jeffy, the tech empire we’ve built is nothing without the radical promotion of buggie chubbies.”