Arriving home in droves last night and this morning, USC students returning from “The Weekender” in Berkeley were ecstatic to learn of their school’s football victory over the California Golden Bears.

“Duuuddde, really? Sick!” was the response of Arshawn Fisher, upon hearing of the win from his roommate who stayed on campus for the weekend. “But bro, I gotta tell you about my weekend. I went all the way up to NorCal, bro!”

Making the trip from Los Angeles to the Bay Area has become a yearly tradition for many students, spending a fall weekend enjoying the best that Berkely or Palo Alto have to offer.

Unfortunately, this year the agreed-upon date for the trip – often called “The Weekender” – happened to coincide with USC’s game against UC Berkeley, meaning many students couldn’t follow their football team as religiously as they do on other weekends.

“We won? Cool! Wait… umm, who were we playing, again?” chimed in Samantha Baker, a yeast chemistry major whose steadfast dedication to Trojan football accurately represented the many other brave fans who made the trek north this weekend.

As they returned to L.A. news outlets proudly announcing the revival of USC football and its fanbase, “Weekenders” brought with them their own tales of athletic prowess. “He must’ve hit, like, 2 or 3 real long ones, dead center, no doubt,” began Mike Simmons. “Heidari? Naw, who…? I mean my buddy Greg – he was absolutely on fire playing beer pong.”

When pressed for comment on her way to class this morning, a sunglasses-wearing Kitty Mills cringed, asked everyone to please be quieter, and whispered “It was an incredible weekend. I just think it’s soooo amazing that everyone rallies to support such an important event, you know? When DJ Seize is playing Pura in San Francisco? I’m so there.”

During Inter-School Trivia Competition, The Price [School] Is Right 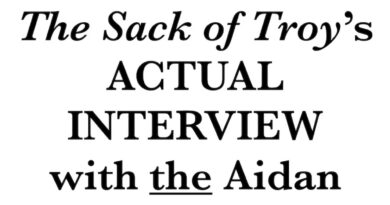 The Sack of Troy’s Actual Interview with the Aidan

Weird Horse Girl a Little Too Into Traveler