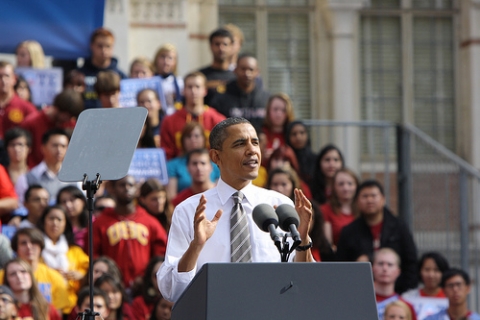 MARSHALL SCHOOL OF BUSINESS — Barack Obama spoke at the Marshall School of Business last night, outlining his recent plans to overcome the checks and balances that plague his administration, as well as encouraging the new generation to make the most out of their education.

When asked about the speech, students expressed shock and disbelief, like Marie Potlick, a third year communications major: “President Obama was on campus? Seriously?! How did I not hear about this?”

President Obama also went on to welcome a number of special guests who also happened to be in the area yesterday evening, some of whom endorsed his presentation.

Arnold Schwarzenegger joined the President and competed in a game of table tennis with him, a throwback to the Super Bowl ad earlier this year. Obama joked, “Uh, you know, should I let the Wookiee win?”

“President Obama AND Arnold Schwarzenegger? How did I not get to go to this?” asked Mike Hans, a graduate student in the Marshall School of Business.

Conan O’Brien, Jimmy Kimmel, Jimmy Fallon, and Andy Richter stormed the stage after that, personally shaking hands with and signing autographs for every audience member in attendance. Conan also reportedly “gave away a lock of hair to a friend of a friend of this one girl who got in,” as reported by Mr. Hans.

The next speaker was George Lucas, joined by the entire cast and crew of every Star Wars movie to date, as well as complete scripts for the next three movies, which he personally handed out to every member of the audience. His presentation concluded with a public execution of a Jar Jar Binks effigy.

When asked if they had heard of the Lucas appearance, three first year critical studies film students were subjected to their faces melting clear off. Their jaws hit the ground, they began to mutter, and their skin turned to liquid.

This reporter was under the impression that they had not known about the event.

After every member of the audience had received their own personal signed lightsaber, Leonardo Davinci, Sir Isaac Newton, and Albert Einstein all came together to promote Newton’s newest book, Principia Mathematica 2: More Principia, a free copy of which was given to everyone seated in the room.

(Preliminary reports indicate that invitations were sent to select members of the Marshall School of Business just before the event took place. The invitations were hand-delivered and self-destructed immediately after having been read. One student who attempted to record the invitation is reported to have disappeared under curious circumstances.)

The night ended with a surprise appearance from Jesus Christ of Nazareth, who descended onto the stage, preached the Good News, and cured everyone in the auditorium of any illnesses they had or ever would get.

He finished his sermon with four brand new miracles he had been working on since the last book of Matthew. He also showed the audience members how they could do their own miracles at home before whispering the date of judgement day and ascending again.

At press time, applications to the Marshall School of Business had more than septupled since students had learned about the event. The students currently enrolled in the Business program had grown up to 72% more smug over the whole thing.

At press time, the students who had attended the Dornsife School’s presentation of “A dude who wrote a book about a thing” unanimously agreed they would rather have gone to a lecture hosted by Jesus Christ and Conan instead. 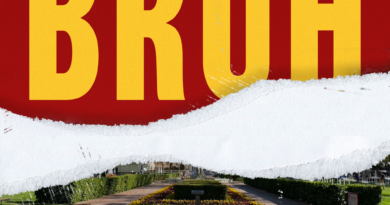 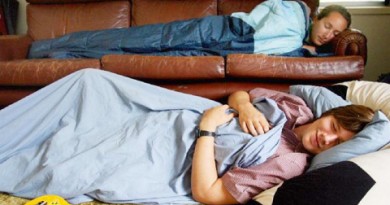