USC — On Thursday, freshman Marissa Kwon made a grievous mistake when she mentioned the Café 84 Starbucks to two juniors, triggering them to trade memories of the old dining hall like it was fucking Woodstock.

“It started off pretty normal,” said Kwon. “Kevin’s friend asked me how my first semester has been going. Everything was fine until I made a joke about how I’m burning through all my money on coffee by always studying at Café 84.”

Throughout the conversation, Yeun and Mukherjee kept sneaking in phrases only they seemed to understand, like “those crepes though, man” and “remember the au jus?” They’d then nod knowingly at one another and staring off into space happily like they were just handed some mystery pills on a farm in upstate New York.

“It’s kind of insane that they’re reacting this way to a fucking lettuce wrap,” Kwon sighed as she massaged her temples. “It’s just a dining hall.”

“It’s NOT just a dining hall,” Yeun later protested as Mukherjee slowly shook his head side to side. “These younger kids, they don’t know what they’re missing. You had to be there.” A tear formed in the corner of his eye and he quickly blinked it away, like a young white man hearing Ravi Shankar for the first time while high.

After sitting and listening to their war stories for over an hour, Marissa got up and said she was going to Ground Zero to study. Kevin and Gautam gave her a look and cried, “It’s not the same, not without the milkshakes.” 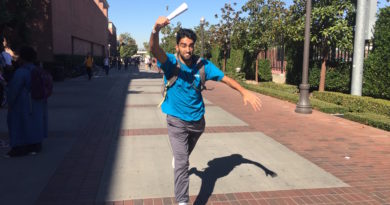