MOSCOW, ID — En route to face off against the USC Trojans at the LA Memorial Coliseum, the bus carrying the University of Idaho’s football team has broken down on the streets of Compton, team officials have reported.

While the cause of the malfunction is currently unclear, officials believe the root of the problem may be the bus’ choice of fuel — yellow potatoes straight from the University’s own fields.

Scientists have been toying with the idea of using potatoes as biofuel for years, but the technology still does not exist to convert potatoes into ethanol, apparently unbeknownst to the University of Idaho.

“We weren’t aware that we couldn’t use potatoes as fuel, to be honest,” said Coach Sergei Putin in a statement. “All we knew was that we had too many potatoes and not enough funding for our crappy – I mean, er, up-and-coming – football program.”

In fact, according to the University’s budget, the school spends over $2 billion on potato farming, but allots only $2,000 annually to its football program, which explains why they had to drive over 1,000 miles for a football game in the first place.

LAPD officers are currently at the scene of the breakdown protecting the farm boy football players from the dangerous streets of Compton. They have advised the Idahoans to “remain in the bus” and “stop watching Forrest Gump on replay.”

As of now, the Vandals’ game against the Trojans has been postponed. Instead, Miranda Cosgrove, conveniently both a celebrity and a student at USC, has agreed to perform a rendition of her hit song “Leave It All To Me.” 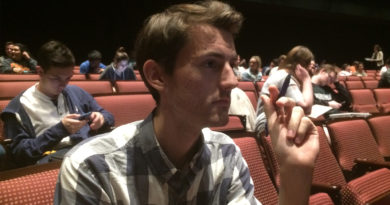