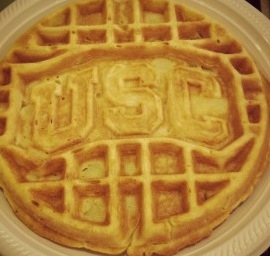 In one of the greatest success stories in recent campus history, USC Hospitality has perfected the Cafe, after only 83 attempts, with the Cafe 84 dining hall.

“It was a difficult process,” said the woman who swipes students’ cards every day, yet still goes nameless.

“Cafe 1 was actually just a golf cart carrying a bunch of stolen goods from Seeds. We realized that we already had something like that right outside of the Lyon Center, so we were forced to move on to Cafe 2.”

She went on to mention that the blueprints for Cafes 2, 3, and 4 were also later scrapped, as they were basically the same idea as Cafe 1, but for stolen food from different sections of Lemonade.

“We almost completed the model around Cafe 23. That model involved the current dining hall location, as well as ample hand sanitizer stations, and completely edible food, which was already a step above EVK.”

“But we said, ‘We don’t want to be good. We want to be the best.’ And so we continued to innovate.”

The well-known yet completely anonymous woman also noted that different input from faculty members made a final blueprint difficult.

For instance, President C.L. Max Nikias wanted a self-service Pirozhki Buffet, and former coach Lane Kiffin ingeniously suggested that silverware be made entirely out of lead. However, in the end, all members were all able to settle on the current layout.

“That was Cafe 83. But then we realized that one issue remained: the food was facing the students!”

“After learning our lesson from the disastrous consequences of the EVK experiment, we knew that this could never be the case. So we gave the chefs full control over the entree distribution, especially the highly coveted ice cream.”

“Because if there’s one thing we’ve learned from college students, it’s that they will never, ever, understand moderation.”

“This was our only choice with a dining hall so close to the Lyon Center. Athletes can eat like you wouldn’t believe. We had to cut them off somehow.” stated the woman, whose name has been reported to be “Celia” by a handful of anonymous sources.

Once the bulletproof shielding was installed to protect the entrees from the ravenous masses, Cafe 84 was born.

Students across the campus are continuously pleased that such effort was put into this particular Cafe, as it is the premiere destination for corn pudding, gluten-free buns, and iced cucumber mint rosemary orange ginger pepper sparkling spa water.

Talks are currently underway for a Cafe 85, which would feature high tables tall enough for the chairs that fit under them, seven to eight additional crepe makers, and doors that do not lock on weekends.