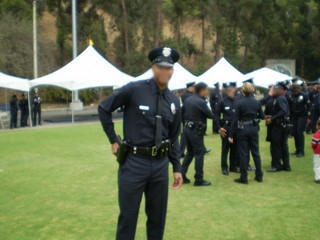 Last Saturday, the community surrounded the University of Southern California celebrated the Department of Public Safety’s initiatives to make the neighborhood safe with a barbeque for the officers.

Rodney Washington, a resident of the apartment building holding the party told Sack of Troy reporters, “We just want to thank DPS for all the good they’ve done in the community. They really are standing up for our rights and protecting the community from the many dangers we face in this neighborhood.”

USC has stepped up enforcement surrounding campus in recent months as part of its new enhanced security measures initiative. DPS spokesman Gary Du Schbag released the statement, “We at the Department of Public Safety are committed to protecting this neighborhood at all costs from the most dangerous threat of all: uncouth USC students.”

The predatory practices of USC students is well known to those living near the campus, and DPS has advised that under no circumstances should any upstanding individual go into hotbeds of criminal activity such as 28th street between Hoover and Figueroa.

Mr. Du Schbag later went on to state, “It is imperative that we give those in the community the peace of mind they deserve, and the best way to do that is to crack down on the pernicious student population in the area.” The policies have been highly effective. Rapes in the area have fallen substantially, as have drug trafficking, underage drinking, and noise complaints. The University has also stepped up enforcement, even going so far as erecting fences and posting guards at the exits to prevent students from committing crimes in the surrounding area.

Fingerprinting systems have been implemented in the dormitories and cameras installed to keep tabs on these malicious individuals. The Los Angeles Police Department has even aided in stepping up security around campus. In addition to their essential role of protecting helpless cars against the dangers of pedestrians, LAPD has been instructed to help equitably and responsibly break up parties dressed in full riot gear.

Despite the success of these measures, advocacy groups in the area claim that officers are discriminating against students and violating their 4th Amendment rights by conducting illegal searches.”It just isn’t right,” Laura Jackson told reporters. “I’ve lived in this neighborhood for years and it just breaks my heart to see rampant harassment of students.”

Kevin Browlower, member of the Alpha Alpha fraternity, was recently accosted by officers. “I was on my way back from this sick party on the row and these three DPS guys came out of nowhere.” He claims that he was then berated by the officers with questions concerning what he was doing on his way back to campus and if he had any narcotics on him.

Browlower insisted that he didn’t, however this wasn’t enough for DPS officers, who allegedly wrestled him to the ground and handcuffed him before performing a rectal cavity search. “Dude, it was like the worst thing that’s ever happened to me, bro.”

Although some members of the community have openly opposed what some are calling bigoted practices against USC students, others believe it is actually helping to keep them safe.

Frank Jefferson, an attendee of the barbeque told us, “You know, when I decided to live around here my parents warned me it was in a bad neighborhood. All my friends told me that I’d be lucky if I wasn’t robbed in my first year by some crazy homeless undergraduate. I’m glad we have DPS to protect us.”

Opinion: Why Did I Come To This Euphoria Party If You Won’t Let Me Take Fentanyl?

USC Graduate Starts Charity to Give IPads to Homeless 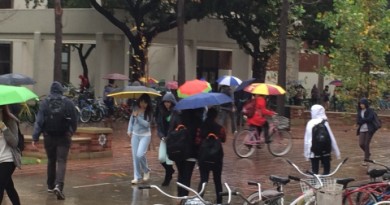