In an open statement directed toward both the university and its student body, the workers claimed, “The New/North Residential Colleges contain unspeakable horrors that endanger both our health and sanity. We understand that cleaning is our job and are greatly satisfied with our salaries, hours and benefits. But nothing in our training could have prepared us for this.” The university’s governing body has yet to issue an official response to these statements and declined an interview request.

Regardless, one disgruntled janitor did agree to sit down and answer a few of our questions anonymously. When asked about what she thought the university should do to alleviate their current stalemate, she offered a simple solution: “Move us to a different freshman dorm, just any other dorm—simple as that. I have a friend who works in the Parkside IRC (International Residential College) and she always says that all she has to clean is a few ripped textbook pages here and there.”

Additionally, a few students offered similar sentiments on the state of “New/North.”

Resident John Joynefrat, a double major in obituary journalism and Finnish literature, offered his thoughts on the New Residential College’s 2nd floor men’s bathroom: “I can’t unsee what I’ve seen in there.”

When asked to expand upon his comment, the freshman explained, “Let’s just say that every time you open a stall door, you’re playing Russian roulette.”

Another resident, Mona Lott, a freshman in the Davis School of Gerontology majoring in geriatric gynecology, expressed her frustration at the situation and her empathy towards the janitor’s strike: “Growing up, most kids were always taught that bodily fluids went into the toilet. I guess, here, people don’t conform. If I was a janitor, I would go find a psychologist.”

When both freshmen were asked about whether New/North’s conditions would ever improve, they responded, “Not until society makes robotic janitors” and, “Only if we put breathalyzer employees at every bathroom entrance,” respectively.

The Sack of Troy will continue to report on this standoff as it develops over the next few weeks. 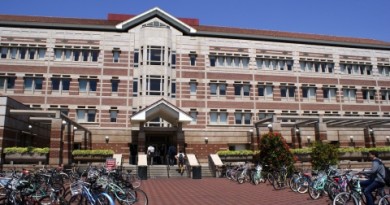