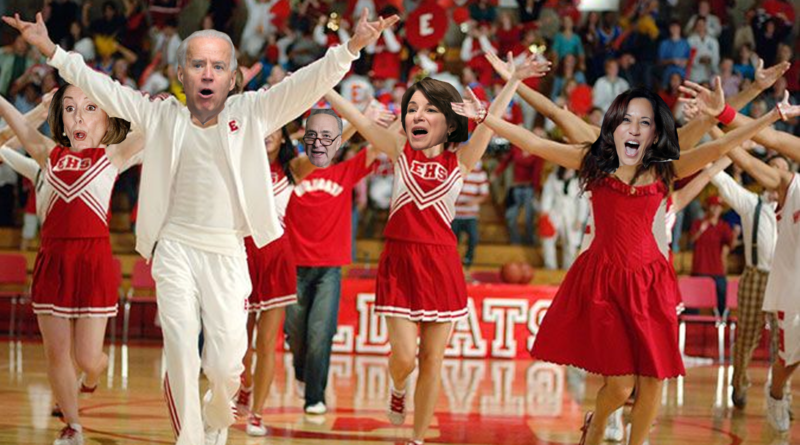 WASHINGTON, D.C. – Democrats in both the House and the Senate banded together on Thursday to present a new kind of stimulus to the American economy: musical theatre. Unable to pass real economic stimuli in both chambers of Congress due to a Republican opposition to helping people in any way, Speaker of the House Nancy Pelosi and Senate minority leader Chuck Schumer led Democrats in performing “We’re All in This Together” from High School Musical.

“We had to do something,” announced Pelosi. “The American people needed some hope and me nailing Gabriella’s solo was just the way to do it.” The Speaker of the House insisted that after extensive research and proposals by members of the Democratic party, an intern’s idea “was the one we saw helping 18 to 35-year-olds, dealing with unemployment, the most.”

According to said intern, “I kinda just mumbled it as a joke during a brainstorming session and suddenly everyone’s calling me the ‘future of the Democratic Party.’” She has since been named the Democratic National Committee’s Chair of Youth Outreach.

However, Republicans have had varying opinions. Senate Majority Leader Mitch McConnell has reportedly been annoyed by the high costs of production but is “glad that the folks who needed money didn’t get it.” Senator Lindsay Graham, on the other hand, complained that he “didn’t get to play Ryan Evans” and “would’ve killed it in a red fedora.”

“I really would’ve liked some cash to pay rent and my bills, but I guess this is equally unsatisfactory as receiving nothing?” said Catherine Stern, a 25-year-old who was recently laid off because of her employer’s COVID-19 downsizing, adding “I guess 2020 won’t be my year of Soarin’ or Flyin.’”