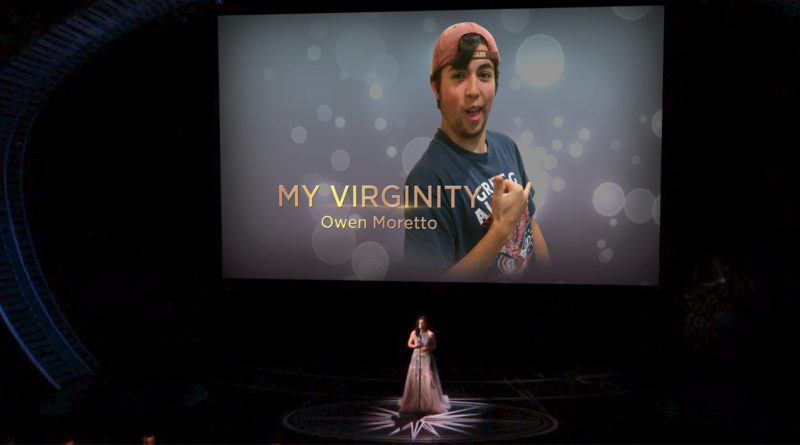 DOLBY THEATRE — The In Memoriam section of the Oscars pays tribute to those in the business who passed away in the last year. However, this year’s homage was interjected by ballsy Oscars production assistant Owen Moretto when he added “My Virginity” to the segment.

Moretto’s announcement was situated between salutes to acting legends Gene Wilder and Alan Rickman. It may have been insensitive, but now everyone knows Moretto’s v-card is long gone.

“I needed everyone to know that I visited the bone zone,” explains Moretto. “I figured, what better time and place? Now I don’t have to tell people one by one.”

The insertion of such a brash declaration was prompted by Moretto finally going all the way with this “total dime” hookup. Moretto’s move was met with polarized reactions. The large plurality condemned his rambunctious act, but a sliver of 13 to 17 year old boys were huge fans.

“He showed me that it’s okay to be funny,” implored 9th grader Lewis Clarkson. “He proved to me that I should do or say whatever hilarious thing I think of, no matter what my mom or teachers say.”

As a result of his actions, Moretto has been blacklisted by every studio, network, and digital collective in town. He’ll never work in this town again. When reached for a comment, Moretto had one thing to say.

At press time it was discovered Moretto also disrupted the ending of the show by giving Warren Beatty the wrong envelope.

Top Five Things Carrie Underwood Did When She Got Cheated On