Students’ viewing of the Screen Actors Guild Awards was rudely interrupted by an extremely important text from DPS reading: “…(2/2)n persons.TXSTOP to opt-out.”

After students experienced many long minutes of confusion—both as to the meaning of the text and as to why they, human beings with fully functional brains, were watching the SAG awards—students received a second text that read:”(1/2) The reported shooting in the area of 24th St & Hoover has been cleared. Damage appears to be from a bb gun pellet.”

Although some students were mildly annoyed by DPS’s untimely double text,others such as international student Ibyn Ly-in, an Atlantis culture studies major, were happy to be reminded that when it comes to keeping students informed DPS is on top of the situation. “Even though the texts come in reverse order and sometimes confuse me, I’m just happy that the first one I read rarely—if ever— pertains to the actual event. I feel much safer knowing that by the time I’m informed as to what actually occurred and what areas to stay away from, the threat has been resolved for over an hour.”

Ly-in has been impressed by DPS’s handling of the situation. He said, “Students need to understand that its not like DPS has a lot of experience with this kind of stuff. And they have tons of other responsibilities like yelling at students to get off their bikes or skateboards when they are ten minutes late to class. And who else will shadily race their segways in the street late at night? DPS does a lot more than just send texts to ensure our campus is safe.”

The head of the DPS’s vast one-person public relations department, Ms. Informed said that she was disappointed to have to distract so many people with such insignificant news. “Shootings aren’t really that big of a deal. Now if someone were to expose himself while in a large crowd of people trying to watch the red carpet ceremony that would merit an emergency text.”

In an attempt to ensure that students get the full SAG experience DPS, sent an email referring students to the website www.stuffnoonecaresbout.edu where truly interested students will be able to re-watch the entire event. 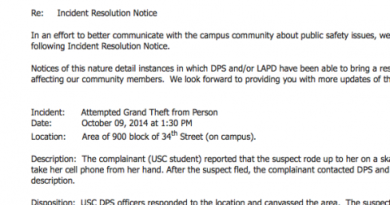