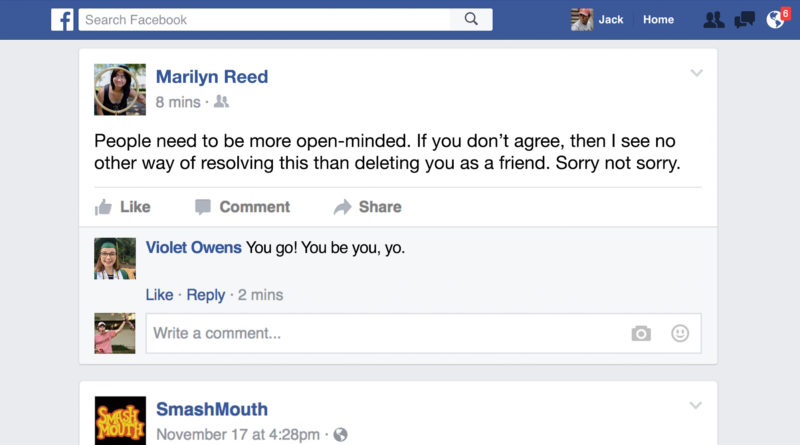 SILVER LAKE, CA — Saddened by the country’s deep ideological divisions, local woman Marilyn Reed made a passionate case for open-mindedness while simultaneously unfriending everyone across all social media platforms who didn’t share her political views.

“People just need to take the time to understand one another,” Reed emphatically proclaimed as she scrolled through her Facebook feed, blocking everyone who hadn’t publicly declared their support for Hillary Clinton. “If everyone just listened more, we’d be so much better off.”

To further her goal of open-mindedness, Reed exposes herself to a variety of media sources and encourages others to do the same.

“My go-to news source is The Huffington Post, but if I’m feeling really open I’ll check out CNN or MSNBC,” she said.

Violet Owens is one of Reed’s numerous friends who aligns with the opposite end of the political spectrum.

“She’s so considerate,” said Owens. “We may belong to different political parties, but that doesn’t mean we have no common ground. Together we can—”

“We’re in different parties?” interrupted Reed. “Never mind, she’s not my friend after all.”

At press time Reed was digging up her old MySpace password to verify which of her old high school friends she could still associate with.