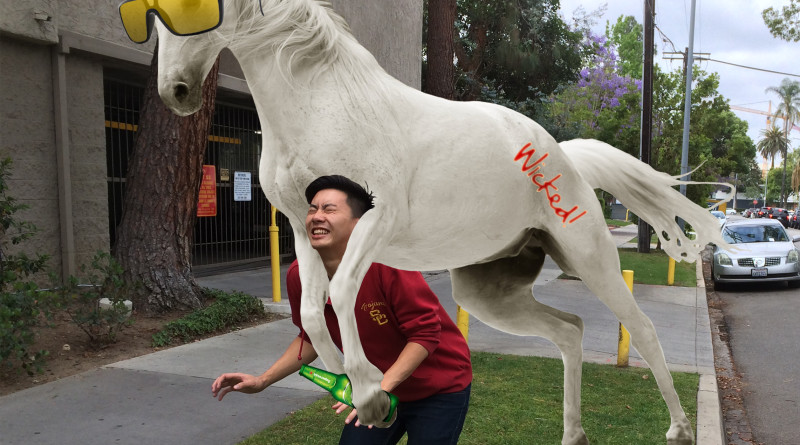 USC has grown all too accustomed to the bacchanals that inevitably occur on late weekend nights, which often lead to shenanigans such as swimming in the Leavey Library fountain and taking drunk pictures on top of Traveler’s statue. In an uncanny turn of events, Traveler himself has been caught engaging in similar antics.

Students report that at around 7:00 on Friday night, Traveler attended a Shabbat dinner north of campus. By 7:15, the full bottle of Manischewitz that he consumed had taken full effect. According to Rabbi Marty Weinsteinovichman, “Traveler is a frequent to our Shabbat dinners. Usually when he comes, he schmoozes, mensches, and lechaims. This time, he just got Kibbutzed.”

After pre-gaming at the dinner, Traveler proceeded to attend a party at Pi Omega Omega (ΠΩΩ). The party, which was thrown to raise money for “Colonoscopies for the Homeless,” quickly escalated from “a reserved wine-tasting to a hardcore rager,” as described by Darrell McDonald, a junior who declined to say his major because he considers himself a “gentleman of leisure.” Details of exactly what happened after this point in the night are hazy at best.

The next day, Traveler’s Facebook profile picture featured him straddling a student. The picture’s caption read, “Y’all can’t handle dis shit!” Ironically, it was this very profile picture that led to Traveler’s detainment by USC DPS, putting an end to his equine escapades.

Of course, this was not the first incident in which a university icon drank more than he could handle. In 2007, Tommy Trojan was hospitalized after consuming an entire bottle of Grey Goose. He was detained after reports of continually stabbing large bodies of grass around the North University Park area.