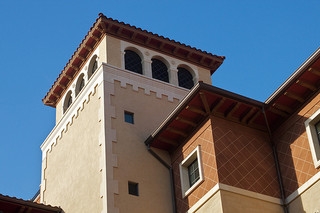 USC has spent decades building its School of Cinematic Arts (SCA) into what is arguably the best film program in the country.

The film school has attracted first-rate faculty and built an impressive set of facilities, as well as a wonderful building that looks as tacky as a Cheesecake Factory at Disneyland, but all that hard work has been undone.

And no, it was not done by Somalians, but some darned kid with a computer.

Instead of having to make it through a rigorous admissions process and paying $59,883 per annum in tuition and fees, anyone on earth can have access to the film school on the internet for free, as well as all of the deleted scenes.

One SCA student, Archie Baxter, a junior-year pornographic production major, reacted well to the complete loss of the school’s intellectual property rights, “This is great. Now that I’ve downloaded the film school onto my computer, I can just stay in bed and never go to class, just like when I was a communications major.”

The Vice President for Special Projects and SCA Spokesperson Jack Scuatte told the media that the pirating of the film school would put a halt to several major projects, “We’ll almost certainly be canceling our plan for a sequel titled, ‘Film School II: Revenge of the critical studies majors’. “

USC is expected to lose millions of dollars in royalties and popcorn sales.