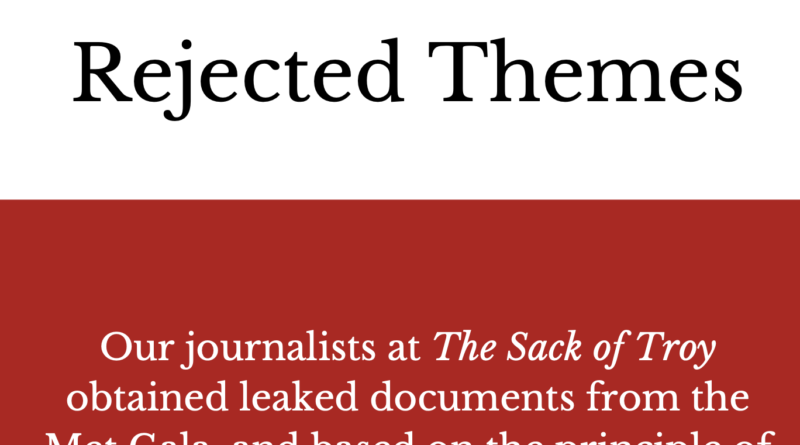 Our journalists at The Sack of Troy obtained leaked documents from the Met Gala, and based on the principle of journalistic transparency are obliged to share

1. The First Time You Had Sex

Inspired by the discomfort, beauty, and grief of losing one’s virginity, this Met Gala theme was pitched to inspire, encourage, and penetrate the minds of the biggest names in fashion. The intense sexual awakening serves as a backdrop of creative genius upon which the gala serves as a canvas for innovation. We had hoped to see not only the physical presented through each look, but also the metaphysical emotional journey.

2. The Outfit in Middle School That Made Your Mom Ask if You’re Gay

Maybe it was the bermuda shorts. Perhaps it was the rainbow kneesocks. Or, maybe it was the fact that you paired both of these statement pieces with a Steven Universe t-shirt and a flower crown. Whatever it was, it made your mother realize you are gay before you even knew it yourself. At this year’s Met Gala, critics were eager to see today’s biggest names rocking the latest Gucci x Hot Topic pieces and horribly-executed pixie cuts –– all the while desperately swearing they’re just allies. This theme exudes a youthful charm and exciting secrecy that certainly would have inspired many fashionable trainwrecks.

To be Maxi-dress-granola or cargo-pants-granola? That is the question. This Met Gala theme celebrates the obviously needed emboldenment of Caucasian culture and the desire of parents wanting their baby to be unique and special after all their amniotic fluid is washed off, despite the ever-present fact that babies don’t contribute anything to society and all look the same. Critics were eager to see the looks featured at the tip of the preppy white moron iceberg- as well as the desecration of the Social Security baby name database.

4. McCarthyism and The Red Scare

Amidst the division in U.S. democracy, what better way to unite than to turn to the state of grace at the Met Gala? Looks include the celebratory lesbian counter-cult of Taylor Swift in response to religious neo-conservatism in the American Heartland, statement Bass Pro Shops chapeaus that scream, “UGH! All you pronoun people!,” and “FAKE NEWS!” as well as the inauguration of the Cold War and permanent war economy!! This theme is a reminder of Red- not Communism, not Republicanism- but the second re-recorded album by American singer-songwriter Taylor Swift, released on November 12, 2021, through Republic Records. Stream it or else. This is the America that liberals want.

The Assassination of Archduke Ferdinand 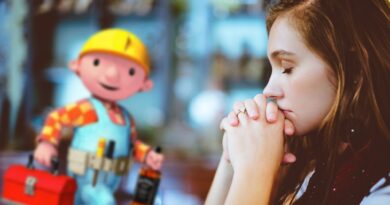 “I Can Fix Him” Says Bob the Builder’s Wife