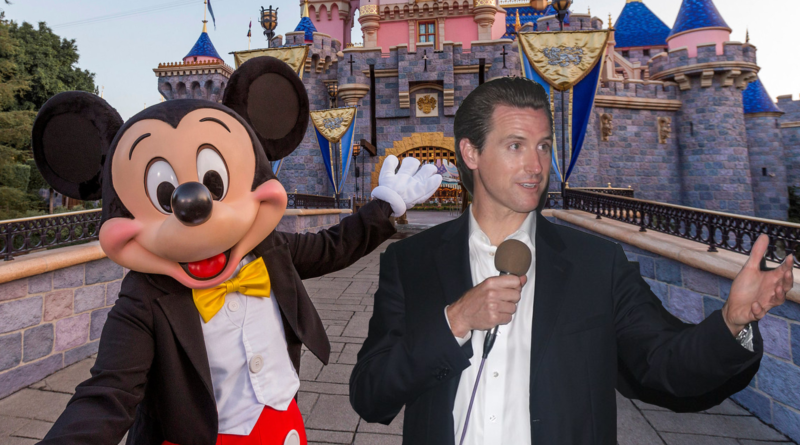 LOS ANGELES, CA – California Governor Gavin Newsom is cutting the price of Disneyland single day tickets for California residents in what many are calling an illegal political move attempting to stave off an inevitable recall election. With strong Republican challengers like John Cox, Doug Ose, and Caitlyn Jenner, Newsom has much to fear.

Newsom announced this discount at Disneyland alongside his pal Mickey Mouse. The governor was eager to make clear that he is a Governor for all of California, and not just the political elite he dines with at the French Laundry. “The 10 million residents of Los Angeles were represented by my state of the state address at Dodger Stadium, so Disneyland represents general Southern California. Essentially the rest of the state.”

At the end of the speech, Newsom allowed Mickey Mouse out to talk about mental health during the pandemic, a new issue Disney is taking on. “Look kids, it’s okay to cry. Right Mickey?”

Mickey responded, “Absolutely, pal. Did you know my tears are so rare that they actually contain the cure for male pattern baldness? Crying all alone with no one to harvest the liquid gold was a huge waste for the ugly old guy community.”

Newsom was quick to cut off the vulnerable mouse, “We are all having big feelings right now. That’s okay. What’s not okay is to recall a governor who is just trying his hardest during a really difficult time.”

When the Newsom team was questioned on what the exact price of the tickets will be, the only response was “If there’s no recall election, you’ll find out.”

With Disneyland set to reopen on April 30th, Mickey Mouse used this platform to encourage guests to return to the theme park. He explained the changes Disney made during the past year: Every child under 16 will be required to wear a backpack leash, lines will extend to San Bernardino to ensure social distancing, and the infamous churros will be $45 each. They have to recover the lowered cost of admission somewhere.

Disney recently announced that they will be theming the park for the entire month of May as “COVID-LAND” to further entice guests to visit. Matterhorn will be referred to as “ModernaHorn,” Pirates of the Carribean as “Pfizer of the Covid-bean,” and Buzz Lightyear’s Astro Blasters as “Buzz Lightyear’s Johnson and Johnson Blood Clots.”