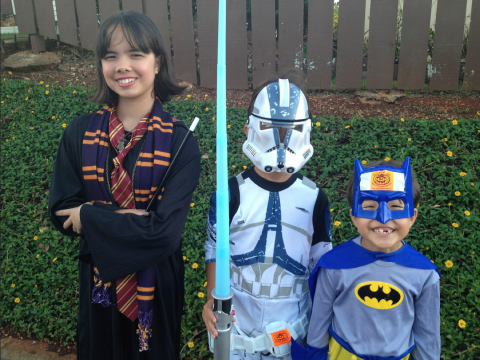 University Park is a scene of utter chaos- martial law has been declared, bandits roam the streets, and diabetes rates are through the roof. The source of the disaster? “Serial Candy Bandits” according to chief of police Todd Stucco.

“We began getting reports around 4 PM, localized around the elementary school.” Declares chief Stucco. “A team of masked bandits have been going door to door, demanding candy in exchange for sparing the victim from a so called ‘trick.'” “We’re not entirely sure what this ‘trick’ is. Rumors suggest it’s something along the lines of ‘pulling down your underwear,’ but if we can learn anything from experience, it probably involves Italian suits.”

Suspects are described as roughly 4’ to 4’ 6” and either “highly spooky” or “worryingly sexual.”

The culprits have yet to be apprehended, but there are several suspects, continued chief Stucco. “So far, eyewitness reports indicate their ranks include a skeleton, Batman, and a sexy eggplant.”

“We have reason to believe Batman is the mastermind, but we can’t be sure yet.” Deputy Lee Stroud chimed in, “some of the burglars are either cops gone rogue, or clever enough to disguise themselves as police officers. Whatever the case, I’d say we’re in a bit over our heads.”

“We’ve already sent officers to pursue the suspects, but they just couldn’t keep up” continued Stucco- “it appears the vast amounts of candy consumed by the bandits has imbued them with some kind of inhuman speed, capable of outrunning even a segway.”

When asked for a proposed course of action, Stucco’s face turned grim. “I’d like to say we’re capable of stopping these monsters, but the fact of the matter is, they’re just too smart for us.” The only words of advice Stucco had were to “keep yourselves locked indoors, tell your family you love them, and pray to Jesus we get through this with minimal casualties.”

In related news, the DPS hazardous materials squad has evacuated an apartment building on 29th Street, and is currently defusing an unattended orange spherical object.