After the football team’s disappointing performance in Boston’s cold weather last Saturday, USC’s athletic department finally decided to ramp up the heat. The impressive new heating infrastructure not only spawns instantly scorching heat and unforeseen levels of humidity around campus, but it also marks the quickest construction project ever performed on campus.

Coach Steve Sarkisian said, “Football is an important part of the culture around here. It only made sense that football should be part of the weather too.”

The players seem to love the new feel as well, as a cornerback said “I think it’ll really help us this weekend. The extra heat in practice just makes it that much easier to give 110 degrees– I mean, percent, come game day.”

One of his teammates hollered, “Turn down for what!” shortly before collapsing to the ground, presumably from excitement.

Many students are in complete agreement. “I love working up a nice sweat in my four minute walk to VKC,” said a satisfied North Area inhabitant. “Now the whole campus feels and smells like Lyon Center.”

“It’s like we’re breathing water. I bet this is what drowning feels like!” agreed one sorority member enjoying the humidity.

Even the band was happy to adapt, as one insider revealed to us they’ve recently added several songs to their setlist, including “The Fire” by The Roots and John Legend, “Jump into the Fire” by LCD Soundsystem, and “Dystopia (The Earth is on Fire)” by YACHT.

When questioned about the legality of influencing temperatures in urbanized areas simply to gain a slight advantage for his warm-weather team, Pat Haden shrugged. “Nah, I really don’t see a problem. But, *psssst* buddy, if it is a problem, can I just pay the fine and quickly sweep it under the rug?”

If the heating system does not work out as planned, USC’s infallible athletic department won’t keep it in place for long. Or, historically, run a bubble screen continuously for at most three and a half seasons. 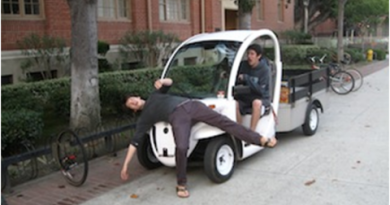