LONDON, U.K. – Early Thursday morning, fans of British folk rock band Mumford and Sons were concerned when frontman Marcus Mumford cryptically tweeted “She took the sons, my god, they’re gone”. When the Sack reached out to the band for comment, we confirmed fans’ worst fears: Mumford had lost custody of the sons to his ex-wife and the band had broken up.

The custody battle revealed many secrets the band kept from the public. The general public was not aware that Mumford’s fellow band members were actually several of Mumford’s sons in disguise. Ben Lovett, Winston Marshall, and Ted Dwane were actually Martin, Mickey, Micah, Matthew, Mark, and Malcolm Mumford standing on one another’s shoulders, wearing long jackets and elaborate masks.

Local fan and child rights activist Lydia Fitzgerald found herself conflicted about her support of the band. “I really thought it was just a name. I didn’t think he was actually forcing his sons to record music,” Fitzgerald said. “Does that fall under child endangerment?” The British courts deemed that it did, thus ending the band’s twelve year run.

TMZ reported Marcus Mumford was last seen at Saint Mary’s Orphanage holding auditions for his next project Marcus and the Motherless. 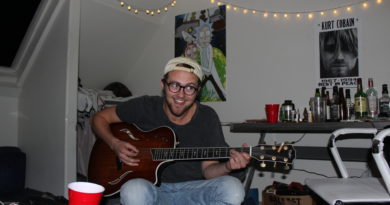 Are you a Star Wars Fan or a Fan of Star Wars?